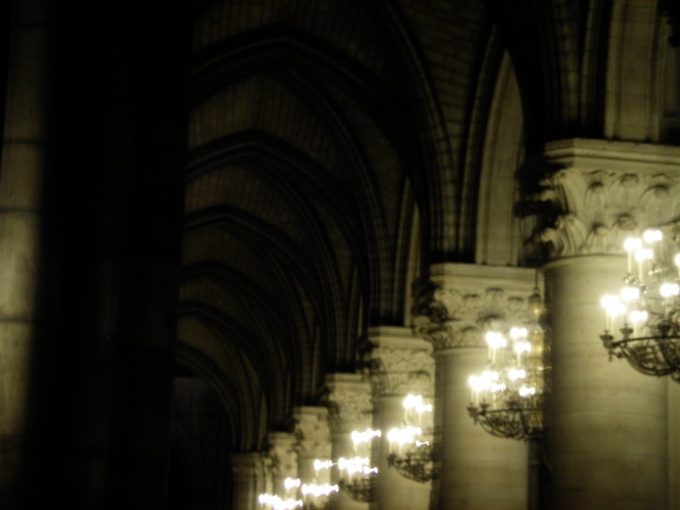 On Good Friday 2019 I had a crazy thought: Don’t rebuild Notre Dame.

I visited Paris as a young backpacker, and wandered awestruck around the cathedral, taking the photo shown here. The awe was partly struck into me by the sheer beauty and scale of the place. But as a rather earnest young man worried about social justice I found a greater awe struck into me by a colossal irony.

Such beauty representing a church that had done such ugly things across the two millennia since its founder died!

In my Christian schooling I was told the beautiful stories of a man with beautiful daring ideas who died for them. What of the church that I found out in history lessons went on to commit so many awful acts in his name?

The list is so long, from burning Ancient Greek libraries to crusades, inquisitions, witch trials (more burning)…and now the child sexual abuse crisis engulfing Catholicism two decades after I wandered through that cathedral.

I have been so sad to see Notre Dame burn, but it is very much sadder to see the Christian ideas it is meant to represent go up in flames so spectacularly, within the very heart of its guardian organisation.

So – what if Paris, France and Catholicism agreed to let the ruins stand as a monument to human faults and impermanence, to inspire true Christian humility and reparation?

Use that philanthropy money as we can imagine Jesus Christ would, not to rebuild the temple (I seem to remember he took issue with grand buildings rendered hollow by hypocrisy) but to repair real social problems, bigger than not having a nice place to put things in.

Didn’t Jesus Christ say something about the church being its people, rather than its properties? I could be wrong, school was a while ago.

Make it sound, of course – shore up the ruins – but then let Notre Dame stand burnt, as a monument to the human failings of church and city alike. Its charred stone could symbolise endurance amid mortality. That’s a pretty big thing in the New Testament, isn’t it?

Who knows, the bloke we remember on Good Friday, who died a horrible death for his great thoughts judged crazy by the powers of the time, might have liked this idea.

Many Parisians would object to such a scar on their beautiful cityscape, but then many apparently kicked up quite a fuss about some metal monstrosity erected for a large fair once upon a time. With sufficient leadership and a compelling narrative, I think in time most would come around to embracing a bold statement in their globally prominent city. The imposing Pompidou Centre and the huge modern arch at La Defense both seemed very much celebrated when I was there.

Then there are the awe-inspiring ruins of central Hiroshima that tell us to cherish life, and respect loss in its random ubiquity; also the less random loss we visit upon ourselves.

Visiting Hiroshima’s ruins reminded me of the Japanese concept of Wabi Sabi – seeing beauty in the fractured, celebrating the imperfect.

Unburned, Notre Dame hid perfectly so many perfectly awful aspects of its religious organisation. A church burnt, now needing some way to begin repairing from the public exposure of its crimes.

What an opportunity this burnt shell of a building could be – a true burnt offering to social justice in the heart of a city home to the most famous social justice revolution.

It won’t happen, because alas, humans aren’t like that. Those in power won’t support such an idea.

That’s the saddest thing for this atheist on this day of faded religious observance: you can die for great thoughts that go on to change the world so much for the better, but great thoughts like that eventually generate power, and power will always attract the corrupt, corrupting so many of the rest it attracts.

Then any new great thoughts are called crazy by the powerful. Heliocentrism anyone? Abolitionism? Women’s suffrage? Climate change action?

And so…around and around it goes.

I can imagine Jesus Christ the firebrand social reformer watching from the next life all this history repeating with the deepest of cosmic sighs. Then reaching for a large bag of chocolate eggs and a popular paraphrasing of Schopenhauer:

“All truth passes through three stages: First, it is ridiculed. Second, it is violently opposed. Third, it is accepted as self-evident.”

(Such confounding humanity makes both chocolate and philosophy quite indispensable)